Rising early on Day 3, I felt this day should be a bit of a reprieve from the 57km's travelled the day before. But from the very start of this segment, it was HOT. And walking briskly up couple of very large sand dunes for two hours, in over thirty degree heat, made very hard work of it. So much for the reprieve!

A few kilometres from the second stop and about 17kms in I really started to the feel the heat. I haven't had to deal with overheating before, and for those of you who haven't either, I can tell you that it isn't pleasant. You feel not quite with it and every step is a massive effort. Your body is screaming at you to stop and drinking water just doesn't feel like it really helps (although of course it does). By the time I reached the second water station, I felt dreadful. I sat down in the shade of the tent, ate my sandwich, took a salt tablet and had a bit of a quiet moment.

It was at this point I was asked by a crew member (for the first time) whether I wanted to be "boosted" to the third water stop. The concept of boosting is simple...you jump into the truck at one water stop, and get off and the next. It really is a fantastic way to go - it ensures that all people complete the trip and cross that coveted finish line.

But for me personally, it represented failure. Having only done one Rat Race event since my birthday, and this being my first Bucket List event, I felt that to take the easy way out would be to defeat the purpose of my year. So with this in mind, I picked up my things, gathered myself mentally, and trudged off again.

The remainder of the day ended up being a little better. The ups and downs were a little more reasonable and the wind picked up. I also joined a group of other participants for the last 20kms or so which made it that little less lonely.

Coming into camp that afternoon I felt pretty relieved to have made the distance using just my two feet and not four wheels. It had been a hard day and there were others that weren't quite as lucky as me and had succumbed to the heat (one nearly passing out and consequentially was scooped up into the car to recover). A number of others were also having to deal with injuries and consequentially cut various segments short.

Three days down, with the toughest yet to come - 19 monster sand dunes to traverse

This was it. The day we had travelled half way around the world for. I was equal parts wildly excited and scared out of my wits.

Namibia has the largest sand dunes in the world, and today, assuming all went to plan, I would be one of only a hundred or so people in the world who had conquered these beasts.

Rising early for a 7.30am start I quickly realised that I had to throw any plans for the day straight into the mental bin. I felt exhausted and I could hardly walk on my feet. I had a large blister on each heel (the consequence of not doing enough walking during my training) so could only tiptoe around. After popping a couple of pain killers, off I set.

From the start, I was back of the pack. After the countdown to go, a number of eager beavers belted off racing down the sand dunes. The rest of the group took off at a very brisk walk. And as for me.....I tiptoed. One step, two steps, three steps....Owee!, Owee!, OWEE!......

But it is amazing how the body adapts. I am not sure if the pain receptors simply get sick of complaining, or the pain killers were super effective, but after about 10kms I started to feel good.

We had been told that we only had 13 dunes to get over (more on discovering that falsehood later!), so there is a huge psychological advantage in counting them down. The experience was also completely surreal - I can honestly say that trekking through those dunes was one of the highlights of my life.

The vastness of the dunes.

The first 20kms I was completely by myself. Yet despite the isolation, I had absolutely no fear of getting lost - I simply had to follow the footprints in the sand (a real advantage of not being first!). At the top of each dune, I could see for miles around me in every direction.

The feeling of happiness and sense of tranquility was overwhelming. No pain and in the grand scheme of things, nothing to worry about...just one of those snippets in time where the stars seem to align and all in life seems as it should be.

Singing Neil Diamond (Sweet Caroline) and Sound of Music (The Hills are Alive) at the top of my voice, I was well aware that no-one could see or hear me. All I had to do was place one foot in front of the other. Perhaps this is the secret to a happy life.

Traversing each dune was also a magical experience. As I approached, I talked to it . On dunes that were particularly challenging, I swore at it. Each was friend and foe, beauty and beast, with its own, very special character.

But in amongst all this joy, I knew I was not moving quickly. In fact, I was last. I knew this because behind me I could see a crew member, Ali - the sweeper.

It is perhaps time to introduce you to the lovely Ali - an amazing athlete, person and my mentor during the next 12 months. Ali has run more ultra marathons then I have had roast dinners. She is also is a "test pilot" for Rat Race bucket list events. Ali is a strong promoter of women doing ultra's and is a person that is hard and squidgy in equal bits . Think smoking, drinking rock-chic turned ultra-runner legend, and you have Ali. Ali also also writes a blog - www.alliebailey.co.uk/alliebruns. If you read her account of the trip, I get a special mention as a " fucking badass". Perhaps one of the best compliments of my life!

About 20kms in, 5 sand-dunes down, I knew it would be a push to complete the day. I was moving at about 4kms per hour (including stops) yet only had until 7.30pm that night to complete. After that time I would be scooped up given it is too dangerous for both vehicles and people to be out on the dunes at night.

So I did what I knew how to do best....begged! I pleaded with Ali to stick with me and fend off any crew member trying to pick me up and take me to the camp site. I desperately needed to complete this day, and I knew sheer stubbornness rather than fitness would be the only way to get me there.

At around 5pm I got to a water stop 35kms in. I had lost all faith in the "just conquer the 13 dunes strategy" as we were already around 16. My body hurt, I wanted to cry and the sun was low in the sky. Being at the back of the participants, I had gained the bonus of a support team - Matt (one of the volunteers who had nominated himself my personal positivity and "you just need to eat some sugar" coach).

I can't remember much after that point, apart from the sheer beauty of dunes at sunset. During this time, the photographers seemed to pop out of nowhere and went wild taking photos. Perhaps there was a real silver lining to my turtle pace - whilst others were back at the campsite drinking beer, I saw a sunset that I am sure is unparalleled anywhere else in the world. 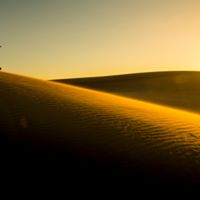 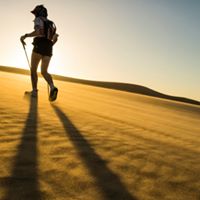 And here is a clip of me about 3kms from the end. Car guiding me in, ready to pick me up in the case of collapse!

Crawling up the final dune at 7.45pm that evening, I draped my arms around Jim Mee (Rat Race big huncho) and apologised for being a rubbish ultra-runner. But I had made it.

I collapsed in front of a roaring fire, and suddenly....felt fine.

Having completed what was probably the physically hardest 4 days of my life, the thought of walking/running 20kms felt like a doddle (It is amazing how quickly ones perspective changes in life!)

And setting off that morning, I was determined not to be last again. Even though my feet felt like they were walking on razors, I was exhausted, very dirty and all-in-all looked a right sight, I went for it. That wreck was waiting for me.

And three and a half hours later, hardly being able to walk, I sprinted through the finish line to the cheering of other participants and a sense of absolute relief. I had done it.

Looking back on this experience, it seems almost surreal now. The pain has largely been forgotten (although my feet are still an impressive sight!). People tell me I should be proud of myself, but I am not. Instead I am left humbled and feel hugely privileged to have been there with a crew, team and participants that understand that it isn't about the achievement, but the battle with oneself to do that bit better than you did yesterday and more than you ever thought possible.

Down but not (quite) out - my lockdown DIY Ironman